The top 5 learnings on brand recipes which turned out to rise up and scored a touchdown, and those that flopped in the oven! 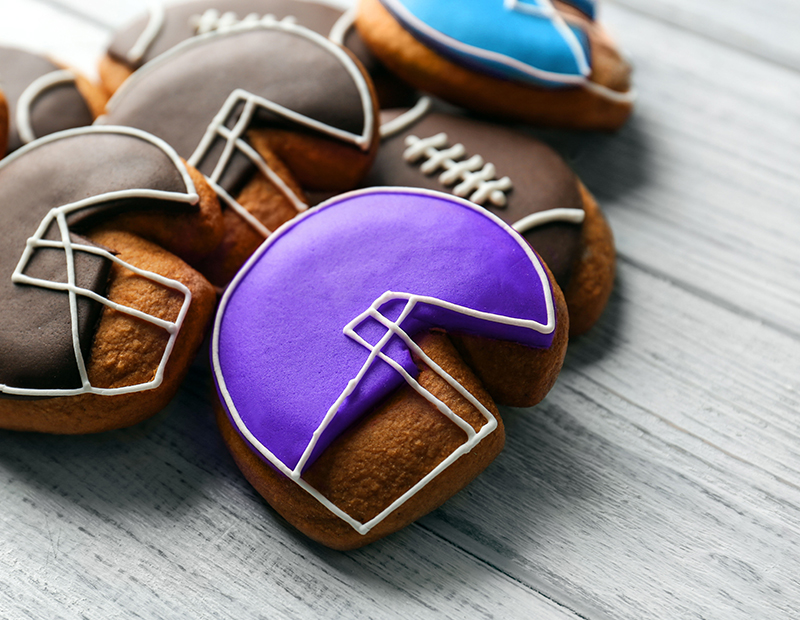 If there are two global pillars of traditional advertising glory that remain in a disrupted industry, one of them is Cannes Lions, the other is Super Bowl marketing. Though centered around a very American tradition, what brands do with their respective performances in and before the game can set still the tone for best-in-class standards for global brand professionals and generate armchair buzz reaching consumers across geographies. The Super Bowl's commercial break is a performance anticipated in itself, possibly featuring the only ads in the world that have week-long trailers leading up to the "real ads", competing with creating the high of the halftime show in multi-million dollar microseconds. It truly is a go big or go home world, with marketers reaching a new record high of $435 million in ad spend according to Kantar, with cinematic long-form TV commercials dominating more than 60 seconds each of nearly half of the 59 slots aired.

For most marketers, the in-game commercial is the apex of weeks-long integrated campaigns across a multitude of domino-like social media, events and promo activations. The math adds up. We also began to see a continuation of the trend of some traditionally “go big” brands, including Nike, Coca-Cola, Burger King, Stella Artois have begun to question spending up to 5.6 million on a 30-second spot, opting for permanent physical investments, digital or direct event experiences instead of banking on making an impact in the sea of inflated price hit-or-miss display ads.

The standing Super Bowl base recipe for success has been the same – peak entertainment and intense emotion through high production values, powerful storytelling, well-placed celebrity use, a meaningful connection to brand equity and cultural resonance. The cultural context of daily life that was suspended for game day has been rife with highly polarized current affairs, an election year no less, pushing brands to pursue sentimentality as a way to unite a highly fragmented society and prevalent culture of cynicism in the midst of a migrant crisis, rapid climate change, distrust in the surveillance age and continued post-truth economic letdown – a return to sweet lightheartedness after several years of darker ads and major stalwart advertisers such as Coca-Cola even pulling ads out in 2019. The greatest challenge marketers faced is twofold: first, deciding whether the 30 or 60-second spot is still worth the media buy before the production, pre and post tail marketing come in, and secondly, creating ideas that are able to embrace and engage a cross-generational and highly diverse wide target audience. This year brand owners decidedly tackled the issue with humor and cozy throwback culture to capture the remaining common ground.

Here are our Top 5 learnings about which recipes turned out to rise up and scored a touchdown, and what flopped in the oven.

The best-in-class cases succeeded in balancing entertainment value and celebrity use with strong ideas and memorable brand linkage. Specifically, Jeep, Hyundai, Mountain Dew work especially well because the actors - playing themselves or memorable characters - fit a storyline that can connect back to the brand equity instead of overshadowing the messaging. No wonder that the following ads ranked in at most emotionally effective by Stream1 as a predictor of long-term growth.

Jeep succeeded making the first ad Bill Murray ever agreed to, reprising his arguably most well-known and culturally beloved role in Groundhog Day to emphasize the experience of never having a dull moment or even the same day in one of their vehicles.

Hyundai cast real-life Bostonian celebs to make what could have been a very generic product feature name unforgettable - "Smaht Pahk"-  all the while transforming a parking demo into an experience as captivating as possible.

Porsche overcame the lackluster storytelling that can befall timeless luxury labels while still being on-brand, staying relevant by creating a well-crafted heist mini-movie and smashing the "electric cars are reasonable but so blah" barrier.

Mountain Dew meticulously recreated some of the most memorable scenes from The Shining with great casting that did not steal the spotlight from their product benefit with a gracefully effective selling line - "As good as the original, maybe even better."

Microsoft brought purpose to life while still showcasing product purposefulness for Surface, also emphasizing how reality storytelling still has a major edge over escapist fiction. The docu-commercial shone the spotlight on SF 49ers Offensive Assistant Coach Katie Sowers’ ambition and work ethic, and not just as the first female coach of the NFL but her striving to be the best coach beyond gender constructs.

Amazon's Alexa ad, narrated by Ellen DeGeneres and her partner Portia de Rossi, tackled the "why do we need Alexa or smart home assistants in general" insight for any remaining skeptics in wide-ranging target audience by taking us through a humorous distant history as a reminder of how tiresome requesting ourselves to do the many things Alexa can do in a second is. It also became the most-watched commercial on YouTube during the game.

The winning move for us was sponsored by (Pepsi) a corporate brand at all but made during the halftime show. If marketing predictions for the decade we left behind was about pushing experiences, not things, then the new decade emphasized the value of entertainment and the arts as the ultimate experience to get the message across. The timeless charm and street smart performance of Jennifer Lopez and easy mystique of Shakira reeled the audience in with a promise of fun and scored the touchdown with a stunning truth about what America (and the world) needs to fix urgently. The Latina duo put on a fascinating performance that celebrated their origins while openly critiquing President Trump’s hardline immigration policy through children performers singing “Born in the USA” and appearing in cage-like props cutting through immaculately cheerful set design like a knife.

The global inclusivity trend was sprinkled all over Super Bowl in the midst of controversy around human rights and heated political debate. Celebrating differences and uniting under one flag was the common denominator in Budweiser’s attempt with ''Typical Americans'' and TurboTax's ''All People Are Tax People'' ads.

Cherishing inclusivity from another angle, Jonathan Van Ness, the non-binary lead of Netflix’s Queer Eye, starred in the Pop-Tarts commercial while Kim Chi and Miz Cracker were portrayed as the first drag queens to ever star in a Super Bowl ad for Sabra hummus. Olay made a feminist call-out to the world asking if there is space enough for women in space, reminding viewers that ‘’If you make space for women, you make space for everyone’’, while Microsoft’s spot also emphasized Sowers’ standing as the first openly gay person to coach in the Super Bowl.

A variety of ads reached back in time, re-imagining the past three decades and banking on the shared love for quirky throwbacks from seemingly less complicated times. Besides the aforementioned nods to Groundhog Day and The Shining, 80s sweetheart Molly Ringwald starred in the quirky ‘‘Avocados from Mexico’’ commercial, as a pitchwoman on the fictional shopping network while MC Hammer reappeared after 30 years to rap his way through the Cheetos commercial with ‘‘Can’t Touch This’’ (also bonus points to Cheetos for flipping one of the worst parts of its product experience into a lovable, ownable quirk). Sylvester Stallone featured in a Rocky cameo for Facebook’s More Together Groups ad. The Alexa ad also threw it back to the 00s Usher & Lil Jon favorite crowdpleaser “Yeah”. Snickers threw it back to Coca-Cola’s hilltop in a Stranger Things-Esque sinkhole world.

Nostalgia is not a new trend but it works as the apple pie of the Super Bowl, creating a pop-culture bound shared legacy across the widest coverage a televised event has ever had to ease the conversation. After all, who doesn’t remember Jack Nicholson in that particular scene even if they haven’t seen the movie?

Kneading With a Human Touch

What we value, what we are afraid of, what we share, our fears, dreams, and excitements… The human touch was well kneaded into the Super Bowl 2020 commercials. The Google spot that featured an elderly man who was searching for ways to remember Loretta, portraying AI as emotionally assisted living, was a tearjerker with probably a very low production budget. The New York Life insurance spot was staged around the different definitions of the word ‘love’ and WeatherTech were some other examples that had a deep sentimental touch. Dashlane and Snickers commercials revolved around mirroring the feelings and anxieties of post-digital consumers whether it’s the fear of forgetting your password, getting hacked, or the one of ever-changing human behavior adapting to new tools. Kneading the human touch in a way that is linked with the product or service benefits a brand has to offer is not a new form of communication and yet a valid and powerful one. While conversations around tech, AI and distrust of the surveillance economy has largely been cast in a cold and unflattering, evil light, Google, Facebook and Microsoft especially made a point of centering their messaging on powerfully human stories, attempting to remind us that technology is a tool that assists boosting life, not the other way around: Technology that understands sentiment and the human need to be taken care of and be cared for is good, data collection for opaque gains is bad.

Expectations were high for Tide who set its own bar above and beyond in a brand new category of transmedia execution 2 years ago but fell short this year while replicating its own formula, wearing the same shirt again with less of a novel impact (pun intended). The partnerships with Budweiser and WW84 (Wonder Woman movie) worked but did not deliver beyond what they did so amazingly the first time around. And the fact that stains can wait is hardly a new benefit in terms of category communication.

Jason Momoa's faux-self coming home and relaxing was interesting to watch but we overstretched its fiction, resulting in the weird watchability overshadowing equity and brand recall in an already cluttered and low-involvement category of mortgage.

Budweiser’s Great American platform took a turn to simultaneously subvert and embrace the “typical American” stereotype, attempting a very Nike-sounding call to action with “show them what typical can do”, but the result was lukewarm with audiences asking where the beloved brand equity boosting Clydesdale horses went.

Nike itself, on the other hand, decided on subtle product placement throughout the game instead of spending money on commercial time, appearing in halftime show performer J.Balvin’s feet, on players’ cleats, and showcasing SB Dunk models in ads for other brands, going the direct route to sneakerheads. Its major investment this year was renovating the top NFL player producing football field in Miami.

Like other traditionally go big mass Super Bowl advertisers such as Coca-Cola (who opted out of its big brand storytelling a second year in a row to promote a smaller fun story around its new Energy drink), Burger King, Stella Artois it seems the time has come to move investments to more efficient and effective means of meaningful engagement with their target audiences.

Overall, for the brands that did partake in the TV ad bonanza, we noticed too little of them taking the opportunity of smart device connected viewers to mobilize them to do environmental or social good in between quarters. Unsurprisingly, the blandest ads were the political candidate spots – those big budgets may have been better utilized as donations to support social equality causes largely implied by the halftime show.